It must have at some point in elementary school when I saw a picture of the pyramids and heard about the ancient Egyptians for the first time. I knew I wanted to go there one day, and I’m sure most people have felt exactly the same way. Few places on earth have this magnetic power, maybe  The Chinese Great Wall, Peruvian Machu Picchu, and to a lesser extent, the Greek Parthenon, the Roman Colosseum, and the Cambodian temples of Angkor. 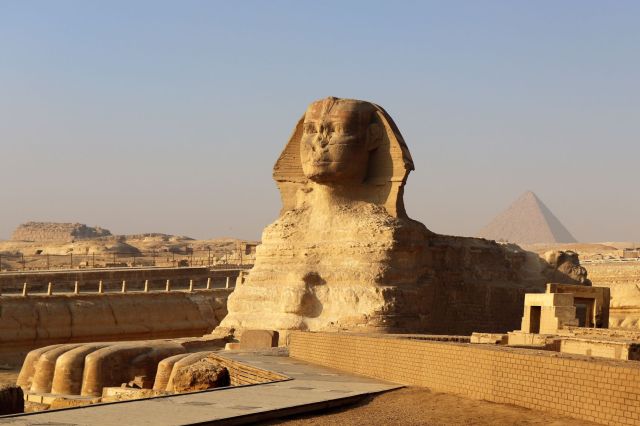 The pyramids of Giza are surprisingly right in the city of Cairo, about 30 min south west from the center. Our Uber dropped us off at the east gate, which is only used by individuals, mostly locals, so we avoided the large tourist groups. It was right after opening time (8am in the winter), and we barely saw anyone as we walked in on the right side of the Sphinx, the pyramids in the background. Wow, it was as amazing as I had imagined.

We veered right towards the pyramid of Cheops (aka The Great Pyramid of Giza), and saw the hordes of tourists piling up by the north gate, so we backtracked and circled the pyramid of Khafre instead. It was super cool to be completely alone, looking at this colossal wonders of the ancient world. I left my mind wander… Why did the pharaohs decide to take on this insane construction? How the hell did they move these giant blocks of limestone? And how the hell did they survive fairly intact for over 4,000 years? Every once in a while, a camel would pass by to return me to reality, and also to make the pictures even more perfect.

We had to walk back to the gate to get a ticket to actually enter the pyramids. The ticket system is not easy to find online and was poorly explained at the east gate, but it’s quite simple: 160 Egyptian pounds to enter the area, 360 to go inside Cheops, 100 to go inside Khafre (or Mekaure, they alternate which one is open), 100 for the boat museum, or 500 for everything. We got the 100 add-on for Khafre, because everyone said it was exactly the same as the Cheops and apart from it being cheaper, the line was way shorter. We walked back over there, circling the Great Pyramid on the west side, and descended into the interior. Leaving aside the cool factor of being inside one of the pyramids, there wasn’t much to see (especially if you compare it to the tombs we would visit in the Valley of the Kings the following days) and it was a bit suffocating.

We briefly checked out Mekaure, which almost seemed small compared to the other two, and started hiking south west, to the small dunes where tourists were being taken in camels and horses. From there, the views of the three pyramids, plus the little pyramids of Queens were outstanding. And once again, I was amazed to feel like we were there pretty much alone. Eventually, we came back down on the left side of the Sphinx, took a few final pics, and exited about 4 hours after entering. We rewarded ourselves for a successful day with some fast food at the Pizza Hut / KFC with the best views in the world, before heading back to old Cairo.

2 thoughts on “Checking off a major bucket list item: the pyramids of Giza”