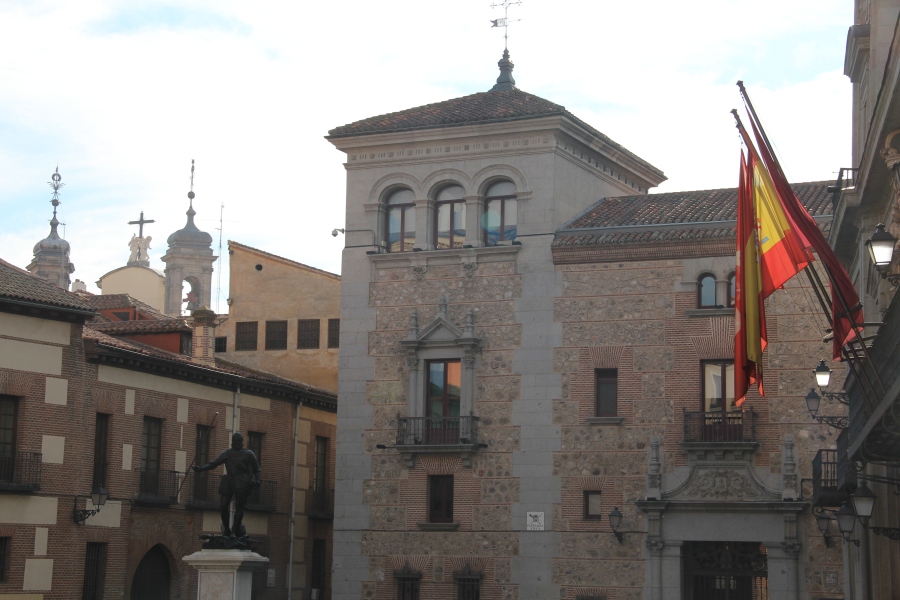 I LOVE Madrid, I honestly believe it is the best city in the world. In addition to rich history/art, and the best nightlife in the world, it has my family and childhood friends 🙂

People ask me a lot what they should do and see when they visit Madrid… and it’s always hard for me to answer. The city we live in is usually the one that we explore the least from a traveler perspective. But recently I had a chance to show the city over a couple of days to first-time visitor Elena, with the help of my good friend and fellow madrileña Anna. 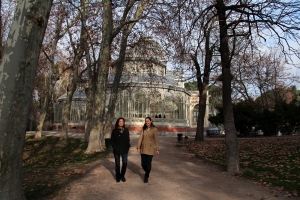 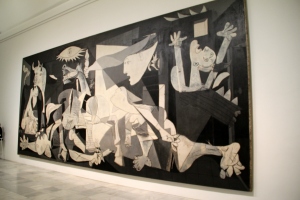 We started our tour in Puerta de Alcala, and walked through the central park El Retiro, where we enjoyed the pond, the Palacio de Cristal and lots of nice paths. From there we went down to the Reina Sofia Museum, one of the three world-class museums that compose the so-called Golden Triangle of Art. This one focuses on modern art, and hosts paintings from Dali and Picasso (including his famous Guernica), among many others. After a couple hours there, we were too saturated with art to attempt another museum right away, so we started walking through the Barrio de Las Letras to Plaza de Santa Ana. The beauty of Madrid is that you can walk everywhere, and each street has unique character and life… We ate some yummy tapas at the plaza and headed back east for the next museum: El Prado. 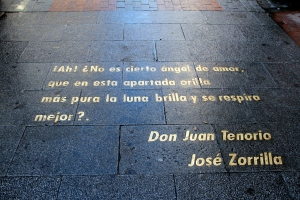 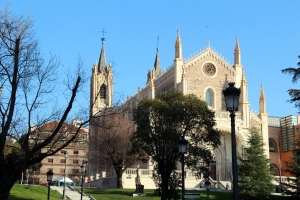 El Prado is probably the best painting museum in the world, and visiting it can be a daunting task (as it happens with the Louvre or the Hermitage). I’d recommend allocating 2-3 hours, selecting the pieces or styles that you’re truly interested in, and tracing a plan on the map provided at the entrance. My must sees are Goya’s El Levantamiento del 2 de Mayo, Los Fusilamientos del 3 de Mayo and his black paintings, Velazquez’s Las Meninas and La Rendicion de Breda, and Bosh’ El Jardin de Las Delicias, After that, please spend half an hour wandering random rooms without an agenda and let the art sink 😉 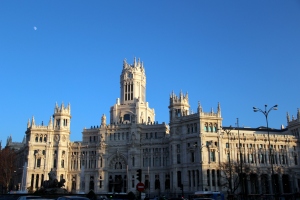 After taking a power nap at Starbucks (for real, museums can be exhausting, that’s why we decided to skip the highly recommended Thyssen-Bornemisza), we walked north on Paseo del Prado to reach Cibeles. This plaza is one of my favorite places in Madrid for several reasons: it is a gorgeous spot, with the Greek goddess fountain and the impressive Palacio de Comunicaciones, it’s where Real Madrid celebrates championships, and it’s the start of my favorite walk in the city. The sun was going down as we walked up Alcala to the fork with Gran Via, marked by the emblematic Metropolis building. There is something awesome about this street, the 20th century architecture, the historical shops… and the hordes of people walking up and down any hour of the day, any day of the year. We arrived at Plaza de Callao and turned left on Preciados to reach Sol, the official center of the city (with the Km 0 plate and the symbolic statue of El Oso y El Madroño). It was dark and the Christmas lights were on. And the streets were bustling with people, just the way I love it. 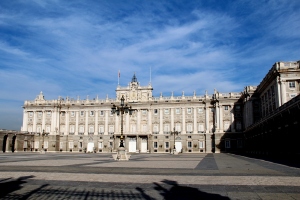 On our second day, we took the metro to Plaza de Oriente. Did I mention that Madrid has broad, modern transportation system? One more awesome thing about my city!. We checked out the Palacio Real and the Catedral de la Almudena, and then wandered through the so-called Madrid de los Austrias, the neighborhood built during the Habsburg dynasty: the Plaza Mayor (colonized by a Christmas flea-market), the Plaza de la Villa, and lots of narrow streets and cute nooks. We took a break to eat some delicious tapas at the renovated Mercado de San Miguel. And then continued our marathon with some shopping in Fuencarral, Chueca and Hortaleza, my old street. 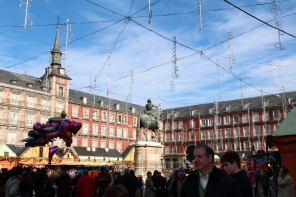 We got a lot done in a couple of days, especially considering that it was Christmas, with all its 5 hour meals. But we inevitably had to skip some things that I’d like to recommend: El Rastro, the rooftop at Circulo de Bellas Artes, the Debod Temple, the Plaza de Toros de Las Ventas (the building, not the actual bullfighting), the Santiago Bernabeu Stadium… and the party. This was a trip to see the family, so there was no room for party, but partying in Madrid is top-notch, I could write another long post about it. Or you could go and check it out for yourself!

51 thoughts on “Madrid as a tourist”