One of the things we really wanted to do in our time in Australia was interact with the autochthonous fauna. We wanted to spend time observing koalas and kangaroos, beyond our brief encounters in Hamilton Island and the Red Center, respectively. And we wanted to get close and touch the animals, if possible. A bit of online research showed us that Queensland was the best state to do so (koala cuddling is not allowed in Sydney / New South Wales, for example), and that the Cairns Tropical Zoo was the perfect place.

We arrived in Cairns after a couple of awesome days sailing in the Whitsunday Islands, and had a bit over 24 hours to explore the area before embarking on a diving liveaboard to the Great Barrier. We had rented a car and planned on staying in Port Douglas, because we hadn’t heard the most compelling things about Cairns. And yeah, after a quick exploration, we thought we made the right choice… There was a very nice artificial lagoon and a waterfront, but the city was disperse, and most of the action seemed to be in the surroundings. So we drove up the coast on a scenic windy road and reached Port Douglas in about one hour. We checked in at the hotel, a Sheraton we had booked with points to relax between our hostel in Airlie Beach and the upcoming liveaboard. That afternoon, we walked to town on the wild beach, and learned that there was no swimming due to extra poisonous jellyfish. We ate a delicious lunch/dinner that included skippy and felt a bit guilty, then strolled back on the beach under the craziest sunset I’ve ever seen, with the sky split vertically into a blue and a purple half.

The next morning we got up early to head to the zoo and catch the animals while they were being fed and still active, before the heat of the day would lull them. We walked into the kangaroo area and were immediately surrounded by the jumpy marsupials. They were so funny, with their strong hind legs, small fore limbs, thick tails and tall ears. And they were very playful, especially when they saw the snacks we had gotten at the entrance. We even noticed that one of the female kangaroos had a full pouch, and eventually saw a bare limb and later a tinny head of the joey come out! 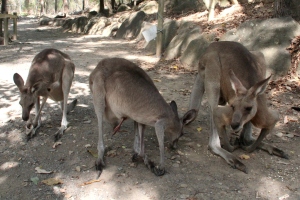 For a while we were there alone, then a caretaker came in and brought a ton of food, and shared it with us and a few other visitors that were starting to congregate. More kangaroos showed up, including an alpha male that I must admit scared me a bit. The caretaker explained a bunch of interesting facts, like how roos can only move both hind legs at the same time, and thus need the muscular tail for balance.

Our next stop was the koala area, where we fell in love with two joeys called Yoshi and Harvey. We looked at these two and their moms in awe, following every move they made, how they walked slowly on the branches, ate eucalyptus leaves, looked around confused, yawned… and hugged each other. For some reason, young koalas like to hold on tight to each other. Cutest. Thing. Ever.

We then got to cuddle one of the koalas, an adult male called Forrest which had a strong eucalyptus smell (apparently they all do). We had to pay extra for this and make a reservation in advance; the zoo is very careful with how much they make each koala “work” to not stress them out. All in all, it felt like animals were treated well in this zoo, and that made the visit the more enjoyable. We spent almost an hour with the koalas, and they were so adorable that we could easily have spent the whole day there.

Before leaving, we walked around the rest of the park, checking out other exotic animals like wombats, wallabies, cassowaries, lemurs, etc. By then, the kangaroos were all dozing, so make sure you time your visit right. We also went back to the koala area one last time before heading out, for a final dose of cuteness 🙂

Back in the car, we were planning on driving to Cape Tribulation, which is supposed to be one of the most picturesque coastlines of Australia… but instead decided to get back to the hotel and relax in the huge pool. Sometimes you gotta treat yourself. And because there was some construction going on at the resort and we complained, the manager treated us to free fine dinner!

PS: This zoo recently closed, but others in the area offer similar activities