After a fantastic introduction to Polynesian landscapes in Tahiti, Moorea and Huahine, and before culminating our trip in Bora Bora, we spent a couple of days in the central Society Islands of Tahaa and Raiatea. These two islands are ‘connected’, encircled by the same reef and lagoon, and are probably the most sailed area of the South Pacific Ocean.

We reached the east coast of Tahaa’s in the afternoon, having motor-sailed from Huahine for about 3 hours. We accessed the inside of the reef via the Taohotu Pass and anchored near the motu Mahae. The water was once again amazing, this time with an aquamarine tone, and we enjoyed swimming, paddle boarding and playing with floaties until twilight. All the sunsets on the boat had been gorgeous, and this time, nature surprised us with a giant red moon. 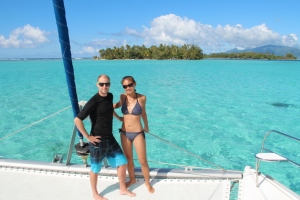 The next morning, after a quick snorkel with sting rays, we headed to the Moorings base in Raiatea. We needed to re-supply on water and gas, and get the dinghy motor fixed; it had been making weird sounds since our incident with shallow corals in Moorea. We also used the time to get food and other provisions for a second and last time, at a supermarket in the main city of Uturoa. It was no coincidence for our base to be in Raiatea, since this island has become the undisputed yacht charter center of French Polynesia, due to its central location and easy waters. 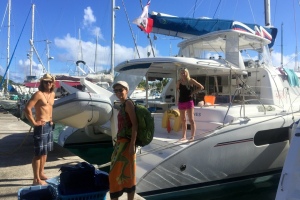 Raiatea is also famous for the marae Taputapuatea. Maraes are traditional Polynesian temples made of stone and believed to have tremendous spiritual importance in the islands from the 11th to the 18th century. This marae is considered the most important one, and can be visited from the main road, near Opoa. We skipped it this time because we had already visited one in Moorea, and because, to be honest, they’re not that impressive unless you have lots of imagination.

After lunch on land, we motored back up to Tahaa, this time to the motu Tau Tau, on the west coast. When we were underway, a couple of local kayakers decided to join us and surf on our wake… it was really cool to see them paddle and drop with little effort. By the time we anchored, it was full on golden hour. So we took our cameras out and had some fun posing in every nook of the catamaran and reenacting Titanic 😉 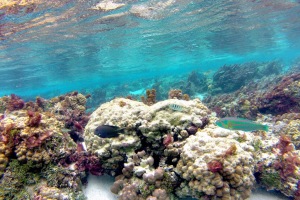 This spot is known for its fantastic coral garden and river-like channel. The next morning, the crew went on a drift snorkel that, unfortunately, I had to miss because of an imminent cold. All of them agreed that it was a world-class site, with transparent waters, colorful reef and heaps of fish.

4 thoughts on “Tahaa and Raiatea, the South Pacific sailing hub”