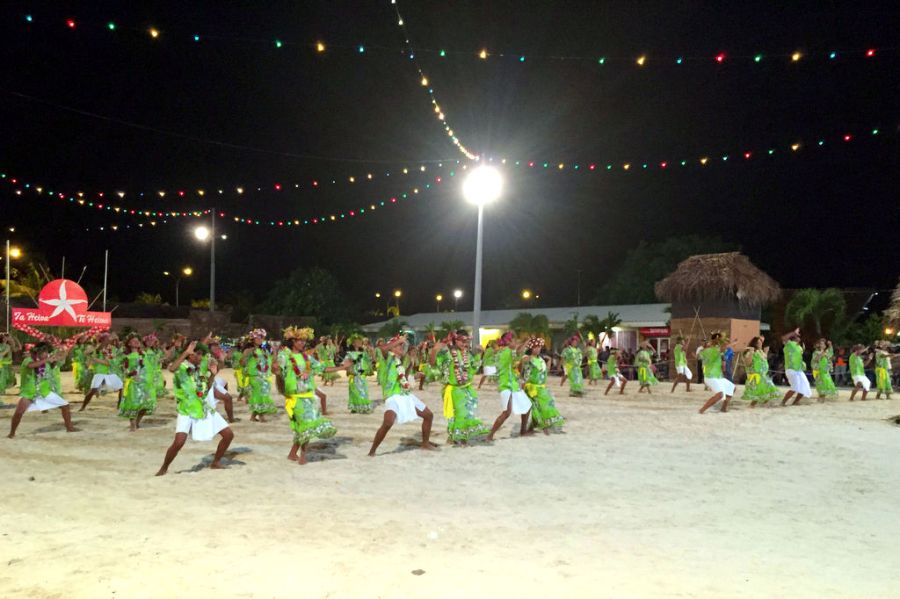 Our time in Bora Bora was not what we had expected. We arrived at the southwest tip of the island in the afternoon, after spending the morning snorkeling in Tahaa. We were really looking forward to this paradise island, but the weather turned on us. The sky got completely covered, the temperature dropped and the wind picked up. As we were fighting the waves (some of us puking our guts out) and trying to enter the protected area inside the reef, our starboard motor stopped working. We troubleshooted for about an hour and eventually resorted to calling the harbor engineer to come on board and help. With his help, we were able to get control of the boat back and anchor near Matira. It was too cold and rainy to enjoy the beach time we were looking for. You probably wonder what you do on a boat when this happens, and the answer is simple: play cards. We spent that whole afternoon playing card games and some charades to mix it up a bit.

At night, we went to shore at the Bloody Mary’s dock and took their shuttle to the town of Vaitape ($5 per person). I was hoping that Heiva, the traditional Polynesian festival that takes place every July across the islands, would be having some event. And on this, we got lucky: the semifinals of their dance competition were that night. The whole area around the pier was set up for the occasion, with a big stage and numerous food shacks. While the dance crews warmed up and the crowds gathered, we played some foosball with local kids and grabbed a bite. Then it was show time, and we enjoyed the energetic performances and local music for a couple of hours. Because the whole island seemed to have gathered for the celebration and finding a taxi didn’t seem to be working, we ended up hitchhiking back to our dinghy. 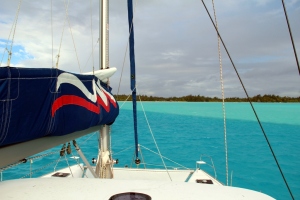 The next day, the weather was still crappy. We even had to cancel the dive we had planned to two of the most famous sites in French Polynesia, Tapu and Teavanui Pass, I felt so bummed. We motored around the island to the eastern side, anchoring close to the motu Fanfan. Despite the clouds, the landscapes were still gorgeous, with different shades of blue depending on the depth. We went snorkeling and found some nice coral, big colorful clams and a giant puffer fish. Somehow, I managed to cut my finger pretty badly on a shell and make the return to the boat memorable. My whole arm was covered in blood and we couldn’t bail water out of the dinghy fast enough, the waves kept breaking on us and filling it to the top. 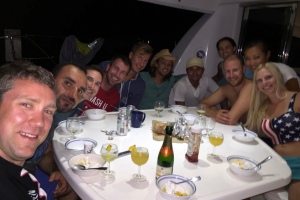 That day also included a lot of playing cards and charades. And because it was 4th of July, we treated ourselves to a copious BBQ dinner and some cocktails. Cooking on the boat had been easier than I expected. It took quite long to do basic things like boil water, or simply feed the 11 of us and clean afterwards, and doing anything when sailing in choppy waters was definitely challenging. But for the most part, the catamaran was equipped with everything we needed, and it didn’t feel all that different from cooking at home. 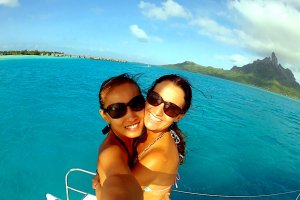 Our last day in Bora Bora arrived, and we finally got some sun. The skies opened slightly and we were able to relish the breathtaking lagoon and the volcanic peaks. We were a bit further north than the day before, near Anau and some of us took the dinghy to explore. The water was crystal clear in some spots and turquoise in others, and combined with the palm trees and the overwater bungalows, created a magic setting.

When the dark clouds covered the sky again, we went to the St. Regis Resort to check out how the rich do Bora Bora (spoiler: I wasn’t impressed, for the crazy price I would expect a nicer beach and more luxury) and toast to the end of our adventure. The next morning we would sail back to Raiatea to return our catamaran and fly back to Tahiti.

4 thoughts on “Lagoons and Heiva in Bora Bora”