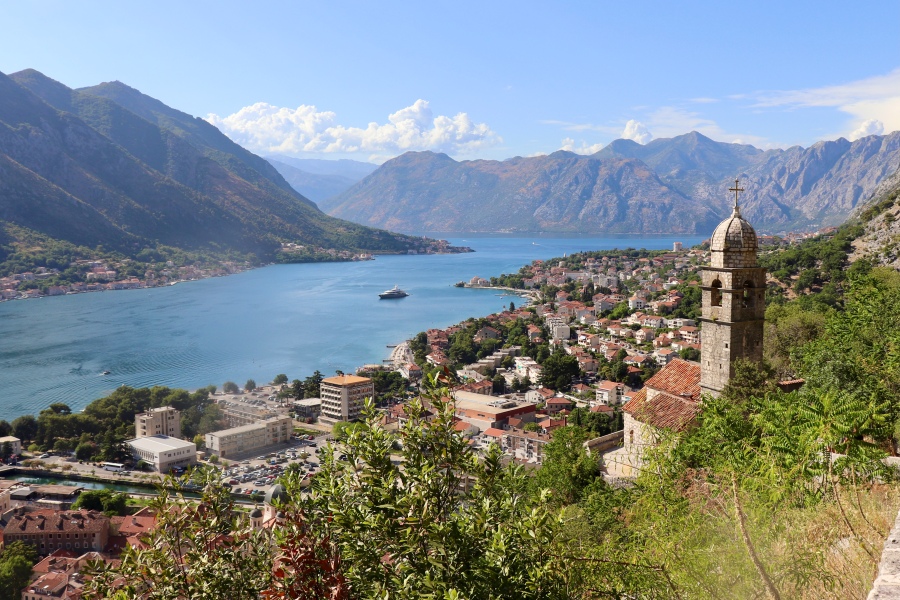 Looking for things to do around Dubrovnik, I realized we could easily pop over to nearby Montenegro, and even better, to what might be its most famous site, Kotor. We ended up leaving pretty late, because we realized we might need a COVID tests not to cross into Montenegro, but to get back into Croatia. Then we go stuck for well over an hour at the border crossing, so even though it was supposed to be a 2-hour drive, we didn’t make it to Kotor until around 2pm.

The final stretch of the drive, winding between the bay and the cliffs, had already been quite pretty. And the first impression of Kotor was even better. We walked through the perfectly preserved moat and walls, and found ourselves in a gorgeous medieval town. Cobblestone streets, little squares, ancient churches, and protecting them all from above, the castle of St. Giovanni. After withdrawing some Euros for the ticket (8 Euros, cash only), we started the famous hike up to it. The 1,350 stairs and 1,200 meters in elevation (~4,000 feet) sounded easier said than done, especially at the toastier time of a hot and humid summer day.

We took our time, stopping to catch our breath and take pictures at the Chapel of St. Ivan and several nooks of the fortifications. After about an hour, we reached the top, and were super happy to see some locals selling cold water. We definitely hadn’t planned this hike properly, but the effort was worth it. The fortress, like the walls of Kotor, were built in the 6th century by Roman Emperor Justinian the Great, and have survived many battles throughout history. The landscape is equally stunning, with the deep blue fjord below and limestone mountains as a backdrop. There is a reason why UNESCO has included the whole natural and culture-historical region of Kotor in its World Heritage Sites list (and I couldn’t keep track of how many UNESCO sites we were seeing in this trip).

After a much easier way down, we grabbed late lunch (or early dinner?) in a terrace restaurant right across from the cathedral of St. Tryphon. We then strolled around the old town, checking out the bazaar, some cute shops, the clock tower at the Main square, the Sea gate, and the walls from different angles. It was getting late, and we were quite tired, so we decided to drive straight back to Dubrovnik. Had we had more time, I would have loved to make it to Budva and Sveti Stefani, two other historic gems in incredible natural settings.

2 thoughts on “Kotor as a daytrip from Dubrovnik”