I’ve hiked in epic places: the Himalayas, the Grand Canyon, Patagonia,… and yet, in my mind, there is no doubt that The Tongariro Alpine Crossing, in New Zealand’s North Island, is the most amazing day hike in the world. The fact that we got to experience it on a perfect sunny day also contributed to making it our favorite experience in this whole trip.

The previous day, as we drove down from Rotorua, we had secured a shuttle from the endpoint parking lot to the trailhead with Mountain Shuttle, an essential preparation for this one-way trek. Bonus tip: there are free hiking poles at the parking lot that you can borrow if you’re early enough, and I couldn’t recommend them more vehemently. We got the 8:30am shuttle and were dropped off to start hiking at the Mangatepopo entrance a bit after 9am. The first hour or so was flat and easy, and we tried to pick up the pace to pass as many people as possible; the trail was packed on this shiny peak season day. Soon, we were at the feet of a picture-perfect volcano, Mount Ngauruhoe, the inspiration for Mount Doom in the Lord of the Rings movies.

The second hour of the trek was much harder, as we climbed up the steep, rocky section known as the Devil’s Staircase. Luckily, the third section was easy and flat again, crossing the plateau from the South Crater to the Red Crater. The views also became more spectacular, the shape of the volcano being more pronounced, its cone peppered with red rock and white snow. The last bit of this section involves a climb on the ridge of the Red Crater, the trail is quite exposed, even has chains to help yourself, and is not recommended in windy, rainy days. 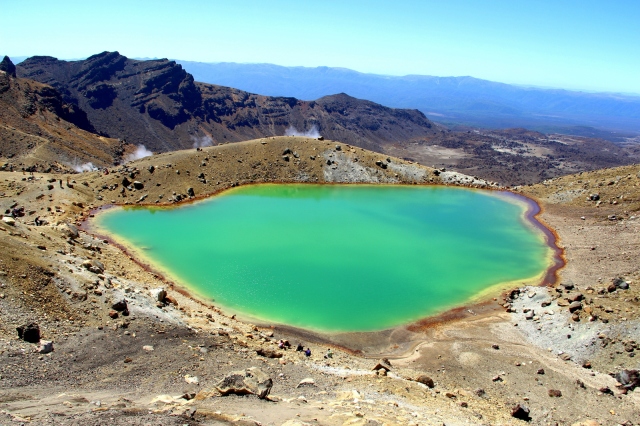 But once we made it to the top, wow, the views were absolutely spectacular. In front of us, the three famous Emerald Lakes came into sight, standing out like they had been painted in the middle of a desolate, volcanic landscape. We began the descent slowly, since the trail was very steep and slippery. We also stopped about 20 times to take pictures. Once we were down by the lakes, we found a nice spot away from the stinky fumes and settled down for lunch. It was almost 1pm, and despite the sun, we had to put on all our layers to stay warm.

The rest of the hike was rather uneventful. The landscapes were beautiful, but couldn’t compete with the Red Crater and the Emerald Lakes. Another relatively easy section took us to the idyllic Blue Lake in about half an hour. From there, the landscape really changed, with the rocks and lava flows giving way to moorland, though the occasional plumes of steam reminded us that we were still in a volcanic area. We went up a bit and then down to Ketetahi Hut, which we reached at about 2:30pm.

From there it was even more downhill nonstop, and the hiking poles came in really handy. After a final section through the forest, we made it to the Ketetahi car park. We missed the 4pm shuttle that connects the end of the trail, where there is a small parking lot that gets full very early, with the larger parking lot by a couple of minutes, so we had to hike an additional kilometer on the road. We were definitely tired (and hungry!) by then, but we were also exhilarated by the day’s adventure: ~20 km (~12 miles), 7 hours, and some of the most memorable views on Earth. We gobbled every piece of food we had in the car and set course to Wellington. Despite the long day, we were so pumped we felt we could make the 4 hour drive that afternoon and treat ourselves to a nice dinner over there.

4 thoughts on “Tongariro Crossing, the best day hike in the world?”