This was a trip that I had been dreaming about for years, one of those epic adventures on the same scale as hiking in Nepal, driving through African reserves, backpacking across Southeast Asia, or sailing in Polynesia. Landing in Auckland, the largest city of New Zealand (though not the capital, that honor is reserved for Wellington), I looked ahead to an unforgettable road trip. The plan was simple: get in through Auckland, near the north tip of NZ’s North Island, get out two weeks later through Queenstown, near the south end of the South Island.

We picked up a rental car and spent a few hours checking out the highlights of Auckland. My favorite spot was Mount Eden, a volcanic cone with gorgeous views of the entire city and the harbor. I was surprised to learn that this city was built on field of volcanoes. We headed downtown for a stroll and lunch. The city didn’t feel like anything to write home about, it was quaint and had some noteworthy buildings, like the Sky Tower, but don’t expect a Sydney. In the lively wharf area, we found a nice restaurant where we enjoyed our first NZ lamb. And then we drove out, towards Devonport, for a final panorama of the skyline across the water. 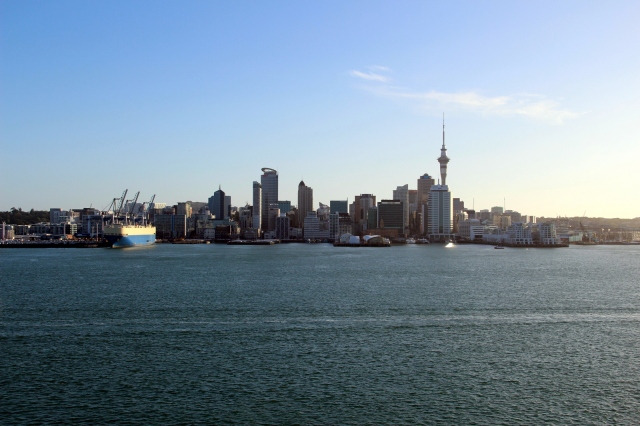 After a quite efficient first day, we pushed ourselves to make the 2.5 hour drive south to Waitomo, so we could also make the most of our second day. We woke up early and went to the office of Spellbound, the company we had picked for a tour of the glowworm caves – probably the best choice if you care more about the views than about having an adventurous experience like inner tubing. While waiting for the tour to start, we had time to gobble some delicious lamb pie for breakfast from the Waitomo General Store. At 9am, our small group gathered and we were directed to a van that would take us to the cave. After a short walk, we entered the dark cavern and waited for our eyes to adjust. As we walked in deeper, we started to see patches of shinny teal dots.

The worms are a type of fly larvae, and their bioluminescence is caused by a protein manufacturing process in their renal glands – not very sexy if you put it like this, but it is magical if you just look at it. There are several colonies throughout the cave. The coolest part of the tour is when you get on a raft and slowly and quietly drift on the river, under a dome of rock covered in glowworms. I really enjoyed the tour, and if anything, it felt short. I was also disappointed that I didn’t get to capture any decent pictures, it’s basically impossible without a tripod and more time to set up. But at least the tour operator sent us some professional photos (like the one above).

Partially to justify their high prices, they then took us to a second cave, this one lit up and packed with stalactites and stalactites. The guide shared some interesting stories, and we saw the skeleton of a moa, an extinct flightless bird. And if anything, it was a nice walk, which we would always appreciate in this trip full of driving. Next stop, Rotorua!

3 thoughts on “Auckland and the first wonder of the trip: the Waitomo glowworms”