Last September, I got one of the coolest opportunities of my life: I was offered to move to Sydney for 3 months, to work on a consulting project. I played tourist, got to feel like a local, and fell in love with this city… possibly, the most beautiful one in the world.

On my first free day, I took a walk through the most iconic sites of the center, a fantastic itinerary that I would repeat several times once Elena came over. I was lucky to be staying at the Sheraton on the Park, where I could enjoy a delicious, abundant breakfast, while looking over the city I was about to explore. I kicked off by wandering around Hyde Park; a simple park in a very cool setting, with the modern skyscrapers of the CBD (central business district) on one side, and the gothic St. Mary’s Cathedral on the opposite. The sandstone exterior is very characteristic of Sydney, whereas the interior, with impressive stained glass windows, resembles that of European churches. 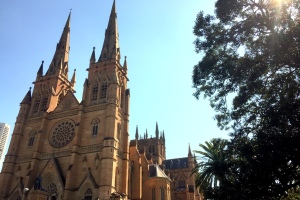 I continued walking north on Macquarie St., passing several culturally significant buildings: The Barracks (19th century housing convict housing), The Mint Museum, The Sydney Hospital, The NSW Parliament, and finally, the massive State Library of NSW. Many of these were built using the same yellow sandstone used for St. Mary’s, giving this part of the city a nice harmonic feeling. For some reason, the hospital quickly became my favorite… It might have been the boar statue at the entrance (Il Porcellino, a replica of the one in Florence), whose snout you should rub for good luck; or the secret patio in the back, where I would stop to catch my breath in my jogging excursions. 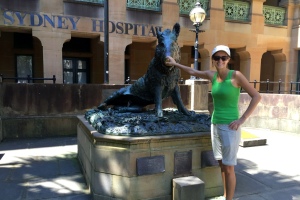 Crossing the road in front of the library, I entered the Royal Botanic Gardens, another one of my favorite spots in Sydney. It’s a massive park in the heart of the city, and it’ full of history, having been established at the beginning of the 19th century by renowned Governor Macquarie. And it’s absolutely gorgeous, especially on a sunny day. There are heaps of flowers (don’t miss the Spring Walk and the fragrant Rose Garden), ancient trees, ponds and fountains, old statues and pieces of modern art, surprising birds (cockatoos, rainbow lorikeets, and ibises, which always made me smile and remember that I was down under), bats,…

But wait, there is more! The Botanic Gardens also have amazing views of the Opera House, standing like a tall ship across the water. I think I will never forget the first time I laid my eyes on this majestic building. I would get closer to it in a bit, but first, I wanted to soak the views from every angle. The best sight is probably from close to the tip of the peninsula, Mrs. Macquarie’s Point, on the trail that goes up from the waterfront to the road. A bit further is where the Governor’s wife is said to have spent her time, enjoying the views, in a bench carved in the rock by convicts known as Mrs. Macquarie Chair.

I walked back on the waterfront path, marveling at the panorama. The Opera House is perfectly escorted by the Sydney Harbour Bridge behind and to the right, and the CBD skyscrapers to the left. We would come back to this magic spot on New Year’s Eve, for the most epic fireworks show ever.

Completing the U shape of the gardens, I eventually arrived at the Opera House, the ultimate icon of Sydney and one of the most recognizable buildings in the entire world. The venue, projected by Danish architect Jorn Utzon, is actually older than I thought, having been built between 1958 and 1973. Its construction was very controversial, and had so many time and cost overruns (eventually costing over $100M vs. the $7M originally planned) that Utzon was forced to resign and a special lottery had to be issued to raise public funds. Beyond its dramatic history, the Opera House is an architectural masterpiece, one of the most visually captivating man-made sites ever. I stood in front of it, marveling at the sail-shaped roofs, covered in shiny white tiles.

I walked around, again relishing each view, and found myself very close to the Harbour Bridge, another engineering masterpiece, this one from 1923-1932. We would explore it in much more detail weeks later, when we crossed it to get to Luna Park, and even more, a month later, when we did the Bridge Climb. This day, I continued walking past Circular Quay, Sydney’s central station for ferries, and enjoying the harbor from all the angles.

I reached The Rocks, the historic center, Australia’s first western settlement. The cobblestone streets and colonial houses make it the most charming neighborhood of the city. Since it was weekend, I got to enjoy the Rocks Market, with dozens of handicraft and food stalls. I browsed through stores, grabbed a bite, and got lost in some of the alleys and crannies. 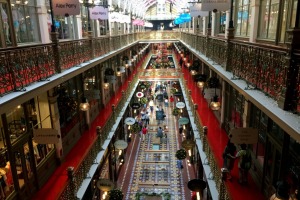 It was late afternoon when I started the rather uneventful walk back towards CBD, following George St. It became lively after Martin Place, when I switched to Pitt St. The stretch between King St. and Market St. is pedestrian only, and is packed with shops and always busy. I checked out the cool Strand Arcade, the only construction from its kind still preserved, and back on George St., the Queen Victoria Building, an impressive mall from the Victorian era. Even if you’re not into shopping, it’s worth exploring the interior of these buildings, with tessellated tiled floors, stained-glass windows, giant clocks,…

Across the street from the Queen Victoria Building I saw the Town Hall, also made of sandstone. Walking back on Pitt St. through more shops and offices, I reached the Sydney Tower, the city’s tallest structure, home of a touristy observation deck. By then I was exhausted, after a full day of walking, so I skipped this site and closed the loop back to my hotel in Hyde Park.

It had been an awesome introduction to the city, the walk I would recommend to any first-time visitor together with a beach excursion. For those with more time to spare, Sydney has many more interesting spots that I would discover over the following weeks.

7 thoughts on “A walk through iconic Sydney”