Back from our unforgettable liveaboard in Sipadan, we found ourselves in the harbor town of Semporna, Borneo, with no specific plans. The area is known for its paradise islands, with white sand beaches and turquoise waters, but unfortunately, most of these have been taken over by all-inclusive luxury hotels, like the spectacular Kapalai. The weather was also not looking particularly good, but we were resolved to explore at least a bit of this rather unknown area.

Asking around the pier, we found a boat owner who agreed to take us to a couple of the islands in the Tun Sakaran Marine Park (or Semporna Islands Park). We joined forces with a Spanish couple we had met in the liveaboard and bargained hard, so the whole excursion ended up being just RM300, ~$25 per person. The sea was very choppy, and it took us quite long to get to the park office to pay the park fees, and even longer to make it to the islands (it was supposed to take 15 min and it was more like 40). Our boat was jumping up and down, and apart from being uncomfortable, it didn’t feel all that safe. Maybe we should have listened when the boatmen said today they weren’t going to the islands… But it was all worth it once we arrived to Bohey Dulang, the main island we wanted to visit. Despite the lack of sun, the water had a fascinating aquamarine shade, and the oddly shaped island stood out over the water with its lush peaks. 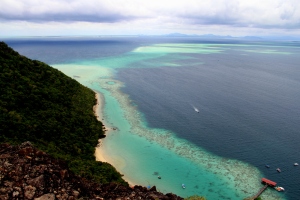 Excited, we jumped on the pier and headed to the trailhead: Bohey Dulang is not famous for its beaches (small and not particularly nice), but for the views from its peak. We couldn’t believe it when the guard told us that the trail was closed! Apparently the trail was muddy and unsafe from the rains the previous night, they were not allowing people to hike up… But we’ve never let these noes deter us. After trying to reason with the guard that they should have informed us at the park office before we paid for the entrance and for the boat and make the trip over, and not getting any results, we opted for the cheeky option: we simply started walking and told the guard we would turn around if it got dangerous. He probably didn’t know how to react to that, so he let us go and eventually followed up from behind. We hiked for about 30 min though thick forest, glad to have our boots. The heat and humidity made the climb more challenging than expected, and I appreciated the markers every 100 meters, until we reached the end at 600 meters.

The views were breathtaking: a lagoon with two contrasting shades of blue, embraced by three sharp, dark green islands. The remainders of an ancient volcanic crater. We took on the views and snapped a few pictures, and the decided to head back under the attentive look of the guard. It was great to have the whole trail and viewpoint for ourselves, we heard that there are usually hundreds of local tourists in this place. We came down and asked our boatman to take us to another island to enjoy some beach time. It only took a few minutes to get to Pulau Sibuan, and from the distance, it looked like paradise. Once we were on the shore, the story was quite different: piles of trash had been washed onto the island, and seagypsy kids were roaming around playing with the trash and begging to the hordes of tourists that had arrived in boats similar to ours. It was a huge shock, seeing how such beautiful environment was being destroyed, and how people could live in these conditions. Here’s is to hoping the Malaysian government finds a way to foster responsible development; tourism could be a huge unlock for these communities, if done right. We laid down in the sand and swam / snorkeled a bit, but it was hard to enjoy given the surroundings. 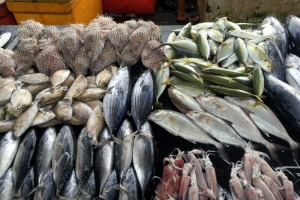 Apart from diving and visiting the surrounding islands, Semporna is a town with very little charm. A few salvageable sights are the fish market near the pier (where they sold several creatures we had spotted during our dives, like puffers, mantis shrimps, and even frog fish L), the mosque Masjid Pekan Semporna, and the restaurant area at Semporna Seafront New Township. It was there, where we splurged at the famous Fat Mother Semporna, and gulped several fresh fruit juices, after our island hopping adventure. The cheapest hotels are also walking distance from there. So if you get good weather, I would totally recommend spending a few days in Semporna, just pick your islands carefully.

4 thoughts on “The best view in Sabah, Borneo”