Cartagena de Indias is a UNESCO Heritage Site, and regularly tops the list of most beautiful colonial cities around the world. This reputation is well deserved. Cartagena can easily be visited on foot in a couple of days, but it’s also the kind of place where you won’t regret having extra time.

We spent almost 3 days there over the Christmas holidays, with the majority of the time devoted to wandering without a plan in the walled city. Entering through La Torre del Reloj (the Clock Tower Gate), we would walk west to Plaza San Pedro Claver, Plaza Santa Teresa, Plaza Santo Domingo, the very instagrammable Abacos bookstore (where we picked up some of Gabriel Garcia Marquez’ works), and through Calle Don Sancho. When we got a bit saturated in that area (it is as touristy as you might expect), we headed further north east, to the quieter streets around Carrera 8, which have equally beautiful and colorful colonial buildings. 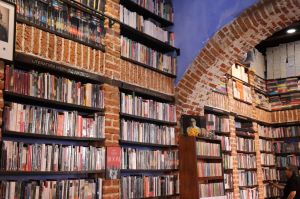 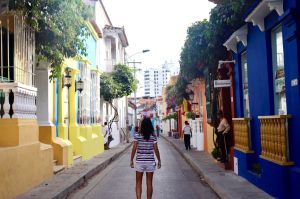 I had seen a lot of pictures of Cartagena in the past, but the place is even more charming in person, there are so many cute details that escape the camera. My favorite one might have been the big metallic door knockers, with different creatures representing the inhabitants of the home: lizards for royalty, lions for military, fish, seahorses, mermaids and octopuses for fisherman, and downward hands for clergy. 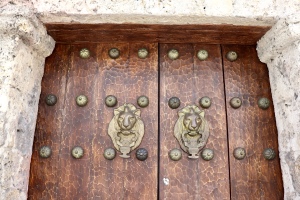 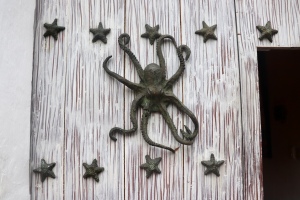 The food also didn’t disappoint, and although we didn’t get to check out the famous La Cevicheria, I can definitely recommend a restaurant called Aji Dulce, where we enjoyed (twice) very affordable shrimp cocktail, coconut chicken and ink rice with a delicious Caribbean taste. What I wouldn’t recommend is the free walking tour that I had seen talked up in a bunch of other blogs… it felt quite long for just a couple tidbits which you can read about online (like the one about the door knockers, or the building of the walls by the Spanish Crown to protect against pirates). Well, at least we got to sample some coconut sweets at the Portal the los Dulces!

The old city is for sure the highlight of a trip to Cartagena, but other places like Getsemani, the San Felipe castle, and the Tayrona National Park are also worth a visit.

3 thoughts on “Walking around Cartagena, the colonial jewel”