Maybe we should have done a bit of research before deciding to go to Jordan over Christmas. Or at least think about it for a minute, and we would have realized that the desert in the middle of the winter is bitter cold. But maybe it was blissful ignorance, because a couple of days later I’ve pretty much forgotten how cold we were, and we still managed to do everything we intended to 😉

Coming from the coastal town of Aqaba, after crossing over from Egypt, and before heading to Petra, we did a 1.5 day tour with Bedouin Lifestyle(135 JD per person, ~$190… yes, Jordan is expensive!). There are lots of tour operators offering very similar services, since exploring Wadi Rum on your own is not really an option. All of them stop in the same spots, and offer to overnight in a Bedouin camp with traditional food. 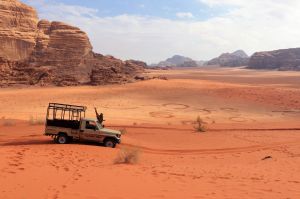 Our first stop was Lawrence’s Spring, where there wasn’t much to see. I definitely recommended watching Lawrence of Arabia before coming to this area, and getting a good book about him to read or listed to while here. Our second stop was the large sand dune, where we climbed up to enjoy some great panoramic views of the red desert. And from there, we went on to a short slot canyon with fascinating Nabatean hieroglyphics. The next stop was a small but beautiful rock arch, where we also climbed up. And then the so-called Lawrence’s home, before driving through some more dunes. 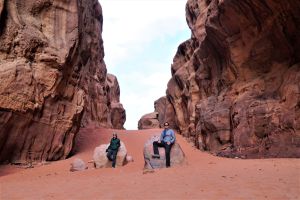 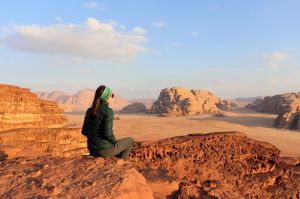 We had lunch at another, this time longer slot canyon, where our driver sent us on a 30-min hike while he prepared the food. It was rather disappointing, consisting mainly of pita bread and canned veggies, which he at least cooked into a stew over a fire. Our next stop was the big rock arch, where there were so many people that it was impossible to get a good picture, or simply enjoy the view. We then drove around a bit more, and eventually found a quiet place to enjoy sunset overlooking the desert valley. 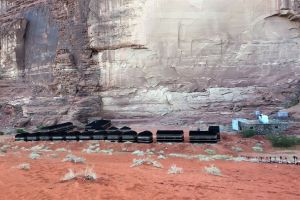 It was pitch dark by the time we made it to camp, and we had been freezing in the open pickup truck for most of the day. Luckily, dinner was served in a tent with a stove, so it was warm and conformable, and it included some delicious chicken cooked in an underground oven. After dinner, the Bedouins replaced the lights with candles, and played some traditional music. I was supposed to be magical, but to be honest, it felt quite touristy. We painfully made it back to our tent and tried to sleep with frozen wind blowing from all sides.

Having checked off all the top sights on the first day, we went on a popular hike called Al Hash on the second day. It was about 3 hours round trip, with some fun scrambling and a satisfying final push to the peak. The landscape was interesting, but both that morning and the previous day, we kept commenting how it couldn’t compete with the ones in our backyard in the West Coast of the US. That day might have been even colder than the previous one, and we had to bundle ourselves in thick blankets taken from our tent to survive in the back of the pickup. Our conclusion: Wadi Rum is worth a day if you’re already coming to Jordan to go to Petra, but it’s not a destination in itself… and much better in the warm season.

One thought on “Freezing in Wadi Rum”