Manly competes with Bondi to be considered Sydney’s best beach. And while its sand and water might not be as picture-perfect as those of its southern neighbor, the Spit to Manly walk is definitely on par with the Bondi to Coogee one. There are about 20 km of scenic trails, which can be completed in a rather long day, or split into two days to get more time on the beach and the lively suburb. 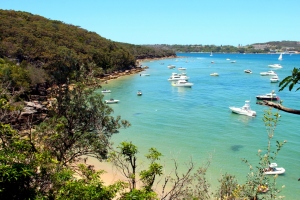 We began our hike at the Spit Bridge, which is easily reachable via public buses like 178 or 180 from Wynyard Station in Sydney CBD. The first section took us through a thick forest, where we got distracted from the sweltering heat by giant lizards popping up in unexpected places, and by gorgeous views of the bay. I am such a sucker for turquoise waters… We then walked on the sand across several beaches until we reached the Sydney Harbour National Park at the tip of the peninsula, where the views of the whole harbor started to open up in front of us. A few meters to the right of the trail, we found some fascinating aboriginals engravings, depicting fish, wallabies and boomerangs. 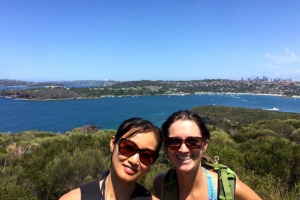 This next leg offered the best views of the whole hike. We stopped at several opening in the bush between Grotto Point and Crater Cove, climbing on whatever rocks we could find to enjoy the scenic panorama: the winding harbor, dotted by beaches all the way to Watsons Bay, and the downtown skyscrapers behind it. Pure magic 🙂

We continued further, passing more cool, little beaches, and soon we were approaching Manly. Maybe it wasn’t that soon, we walked for about 3 hours, but time flew. We could have continued hiking, completing the loop around North Head, but we decided to spend the rest of that day here, and come back for the second part of the trek another time. We walked around the wharf and through El Corso, Manly’s main street, which is pedestrian-only and packed with shops, restaurants… and of course, people. It was super lively, and we enjoyed getting some souvenirs and fruit juices, before settling on the beach to relax. 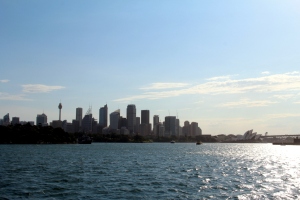 But no trip to Manly would be complete without a ferry ride. So when the sun started to come down, we walked back to the wharf, topped up our Opal cards, devoured some delicious Thai food (found a surprisingly great restaurant inside the terminal) and lined up to get on board. The views from the ferry were as epic as I had envisioned; the solemn arch of the Harbour Bridge, the always inspiring Opera House, the modern skyline, the feeling of navigating one of the most amazing harbors in the world… 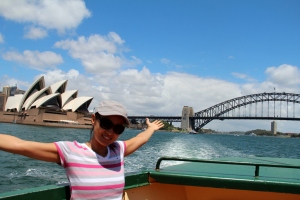 A few weeks later, we came back for more. This time we started by taking the ferry from Circular Quay to Manly… and yes, we did take more pictures of the Opera House and the bridge, it never gets old! This time, we wanted to hike the remaining section of the Manly Scenic Walkway, up and around North Head, to end back on the beach.

We walked on the waterfront and some residential streets until we reached the National Park area. It got green and humid, similar to the first section by the Spit, and our efforts got once again rewarded with views of pristine coves. Not really knowing where we were going, the next stretch was the toughest. We took a paved road up for about 20 minutes and showed up at some sort of official compound. We walked across a scorching clay field and several barracks, and gathered from some signs that this used to be an important army setting during WWII. 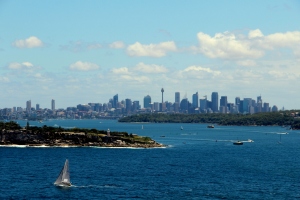 A bit further, we found a visitor center and learned more interesting facts about North Head. During the 19th and early 20th century, it was used to quarantine passengers of ships arriving to the colony. We even walked past the quarantine cemetery, as we explored the peninsula. We finally reached the famous Fairfax Lookout, a short trail with spectacular views of the harbor and the city, and took a beak to soak them in.

As we began the walk back, we thought we had seen everything there was to see… but there were still so many surprises! On the Fairfax Loop itself, we took the longer way out and stumbled upon an amazing viewpoint, this time over steep cliffs and azure waves. Such a picturesque spot… Elena couldn’t believe her eyes hahaha.

Back on the main track, we started hiking downhill, and ran into some intriguing WWII anti-aircraft artillery emplacements. We eventually reached the stone wall that used to separate the quarantine area and now marks the end of the National Park. Here, we almost got lost and had to backtrack a bit to find the little gate on the wall. On the other side, the scenery was again fantastic, with Manly Beach emerging in the background. We walked down to Shelly Beach, whose clear, protected waters looked very inviting for snorkelers, and savored the final mile of the coastal walk.

You can get detailed brochure of the Spit to Manly and North Head trails here. Enjoy!

3 thoughts on “Manly Beach and the hike from the Spit”