Hoi An is, without a question, the most charming city of Vietnam. Nicely preserved and protected by its UNESCO World Heritage Site status, it enamors you with its yellow French colonial buildings, Chinese-style shop-houses, lively riverfront and colorful nights. It is, in contrast with the rest of the cities we visited in this trip, a city for pedestrians, with the Old Town closed to cars and even motorbikes at certain times. Unfortunately, with tourism comes exploitation, and Hoi An has established a pretty aggressive admissions system, which mandates tourists to purchase a complex ticket: 120,000 VND (~$5) get you 5 coupons to access a subset of the sites of interest, e.g. one of the landmarks (Japanese Bridge Pagoda or Quan Cong Temple), one of three traditional houses, one or two museums, and one or two congregation halls. This ticket is supposedly required also to simply walk around the Old Town, but we didn’t see it being enforced. We actually managed to visit most of the sites without buying the ticket, by playing fool, chatting with the attendants or sneaking in while they were napping. In addition, most of the handicraft workshops have been transformed into tourist traps, and the restaurants, tailor shops and cyclos are overpriced. But don’t let any of these, nor the crowds, ruin your experience, Hoi An is gorgeous!

Arriving from Danang’s Marble Mountains midday, we decided to devote 2 days to Hoi An, plus a half-day to visit the nearby Cham ruins of My Son. Our first agenda item was to eat Vietnam’s best banh mi, which we had been craving since Elena saw Anthony Bourdain recommend it. We walked to the stall called Banh Mi Phuong and were not disappointed… the sandwich was meaty and juicy, so delicious that we had seconds.

Then we got lost wandering around without a map, and enjoyed the lesser known parts of Hoi An. We discovered the authentic waterfront to the east of the Old Town and fell in love with this cute baby girl on one of the river islets. We eventually made our way to the central part of town, passing through the vibrant market. We continued walking by the river, surrounded by mustard-painted houses turning ochre as the sun set. The atmosphere was quite magical, with the colonial buildings on one side, dozens of colorful boats ready to take you on a ride on the other, and tons of people everywhere: Vietnamese and foreign tourists walking around, locals biking, a group of kids practicing martial arts,… We crossed the river back and forth to An Hoi peninsula, relishing the views as the colorful lanterns lit up. But we were tired from our early morning hike, so we decided to call it a night early, enjoy a satiating meal (Indian, for a change) and make the most out of the next day.

We got up early for our “walking tour” of the Old Town, and headed to the west end, where we checked out the distinctive Japanese Covered Bridge and the Phung Hung old house. After exploring the quiet streets on the west bank of the canal, we crossed back east and stopped at the Cantonese Congregation. These congregations are pretty interesting and typical from Hoi An, basically a mix of temple and assembly hall for different Chinese ethnic groups that settled here since the 15th century. 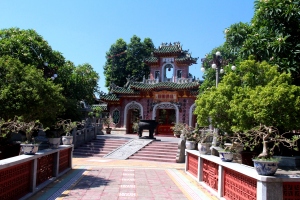 We walked back eastward on Tran Phu street, and detoured on Le Loi street to peak into the Truong and Tran Family Chapels, which stand out for their carved wooden architectural elements. We continued our stroll among yellow and teak facades, and next stopped at the Museum of Trading Ceramics. Rather than the exhibits, what was worthwhile was the building itself, and the mosaic in the inner patio. A bit further, we visited the Fuijan Congregation (probably the most memorable of all), the Quan Cong temple and the Hainan Congregation.

All in all, it took us about 4 hours, with lots of breaks to check out souvenir stores, workshops and galleries. After a light lunch and yet another sugarcane juice, we made our way back to the hotel to get out of the scorching sun and organize the following days. We also had time to rewatch some scenes from the excellent film “The Quiet American”, which was partially shot in Hoi An, standing for 1950s Saigon.

By late afternoon, we went for one last walk in this wonderful town. We wandered freely around Tran Phu, Nguyen Thai Hoc, Hoang VanThu and other colorful streets at the heart of the Old Town. Then we chose a nice restaurant to try some of the local cuisine specialties, like yummy cao lau (noodles with spiced pork and greens). When we came out, the city had already put on its gala clothes: hundreds of colorful lanterns shined in the pitch dark night, and tens of candles floated in the river. 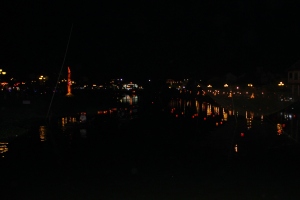 There was a folk music performance at the north end of An Hoi Bridge, and the streets were crowded. On the other side of the bridge, the night market was in full swing and there were even more people. Most stalls sold the famous silk lanterns, but also jewelry, snacks, etc. We walked around for a while longer, until we felt like we had soaked up the images of Hoi An and burnt them in our memory forever.

4 thoughts on “Walking around Hoi An, Vietnam’s jewel”