After five days in Mahe, we took the ferry to La Digue. This island is fairly different from the main one, much smaller and with a limited number of cars, everyone moves around in bicycles. And although there are hotels, most people stay in so-called self-catering rentals, which you can easily find on Airbnb. These were the spots we visited over a little under three days:

Anse Source d’Argent: This beach is the most famous one in all of the Seychelles, as it has been named “the most beautiful beach in the world” in many rankings. Unfortunately, that means it gets crowded with tourists, while many other equally stunning beaches across the country are pretty much empty, and this really detracts from the experience. In addition, the beach is inside a private estate, so you have to pay 115 rupees / ~$10 to get in… except we found a loophole: we were able to get in two different days by walking in the water from the beach further north J It’s worth noting that they control the exit on the land, so if you “break in” you must “break out”, and that things get very tricky when the tide goes up (read: water up to your throat).

The beach itself is comprised of several coves with thin white sand and very cool boulders. The water is extremely clear and you can spot large fish easily, but swimming is not particularly easy due to coral reefs and seaweed. In addition to the beach, the estate has interesting plantations (e.g., vanilla), and giant tortoises you can feed, though these are in an enclosure and not very active. All in all, we did enjoy Source d’Argent the two times we went there, but I would definitely not put it at the top of my list of things to do in Seychelles, not even in La Digue.

Grande Anse, Petite Anse, Anse Cocos: On our second day in La Digue, we rented bikes (100 rupees / ~$7 per day, cheaper on the main road than at hotels) and headed south. The ride was very enjoyable, and we made it to Grand Anse in about 20 min, after a quick stop at a minimart to buy snacks (since takeaway places didn’t seem to open until lunch time). Grand Anse was yet another fantastic beach, but maybe a bot rough for swimming. So we left our bikes behind (no lock needed in this tiny island) and kept going.

From behind Grand Anse, we took the trail that led us to Petite Anse in barely 10-15 min. Once again, the beach didn’t disappoint: turquoise waters and white sands, lined by palm trees and boulders. It was scorching hot, the first day we had had with no clouds and no signs of rain. Luckily, the locals who run a juice bar on the beach had built a handful of shacks out of palm tree leafs, and we were early enough to grab one.

After chilling for a bit, we continued on, taking the trail just behind the juice bar towards Anse Cocos. This trail was a bit longer, around 30-40 min, and rockier, and we were glad we had sneakers with us rather than just flip-flops. Anse Cocos immediately won me over, I’d definitely say it’s the best beach in La Digue. The sand was extremely soft and fluffy, and the water had all shades of blue and green. And on the far end, beyond the first boulders, there was an unreal natural pool with even more clear and calm waters. We spent hours there, playing in the water and sand like kids J In the late afternoon, we biked back to town, stopping at Ray and Josh Café to grab some delicious curry.

North shore, Anse Severe: On our last day in La Digue, we rode north, enjoying the scenic shoreline, and eventually turning around and settling at Anse Severe. The sand was not as good as in other beaches, and the coral reef and low tide made it hard to swim, making it easier to just lay in the shallows. But we still liked it, because it was very laid back and the water was as perfect as everywhere in the Seychelles. 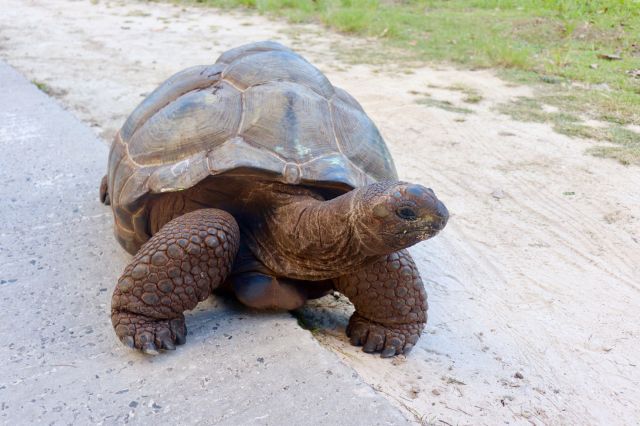 And in any case, we had a different agenda: we wanted to see tortoises in the wild and they hang out in the area. During the day it was too hot and they were sleeping tucked under the trees, so we went on another bike ride to Source d’Argent and to the nature reserve in the middle of the island, and by the time we came back two tortoises were out on the road. It was very cool observing them, they looked like dinosaurs, and they don’t seem to mind being petted! Anse Severe was also a perfect spot for a final sunset and a final fruit juice in the Seychelles.