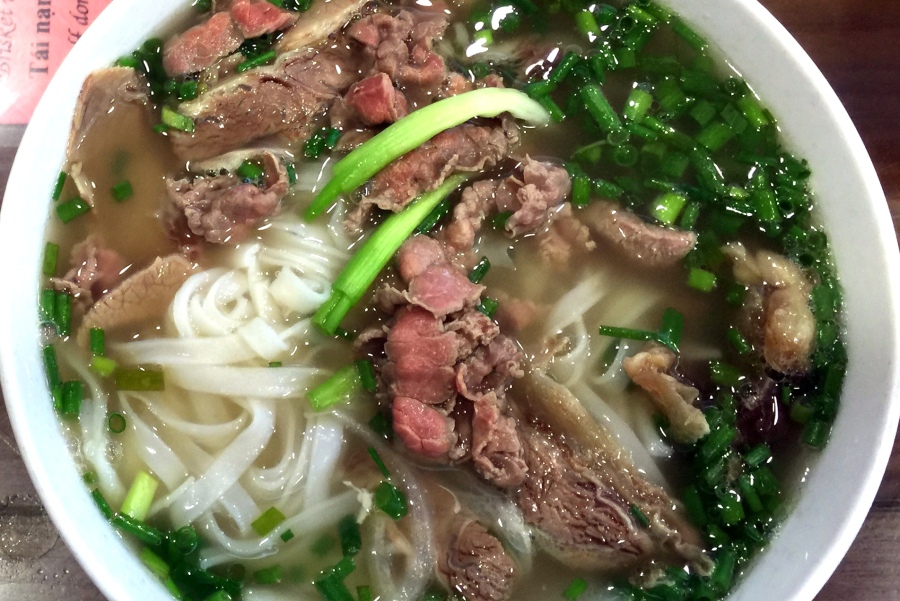 Hanoi is not the most welcoming city in the world, one really has to try to get to like it. On our first evening, we ventured to explore the Old Quarter, where our hotel was located. The narrow streets were taken over by people, motorbikes and shops, organized by trades (e.g. we were in the toys street). Between the heat and humidity and the masses of tourists, walking around felt exhausting, so we made our way to Hoan Kiem Lake (where the legend claims a giant turtle stole the king’s sword) and checked out Ngoc Son Temple. As we walked back toward the Old Quarter, taking a detour west to see less touristy areas, a brutal storm broke out. Luckily, before being completely soaked, we found the mall Hang Da, with lots of handicraft shops to keep us entertained until the skies cleared. And as we walked back through the night market, and to the nightlife/pedestrian-friendly area around Ta Hien, we were compensated by one of the most gorgeous sunsets ever. And then by some yummy local specialties – spring rolls, pho and bun cha are must tries. 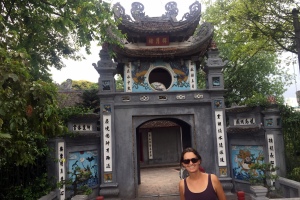 The next morning, we woke up early to see the highlight of Hanoi: Ho Chi Minh’s mummy. We took a taxi to the mausoleum, and were almost ripped off… This is a constant struggle in Vietnam; try to take only the green Mai Linh ones, which always use a properly working meter. When we arrived, we saw a never ending line, extending from the entrance of the massive complex to the infinity. It was Sunday, and almost all the people in queue were locals, for whom seeing the corpse of their Communist leader is like pilgrimage. The line seemed to move fast, and there was no way I was going to give up my only chance of seeing the mummy, after missing out on Lenin’s during my visit to Moscow.

It took us almost two hours to get in, and we made a bunch of friends as we constantly called out people who were trying to cut the line; people around us would smile and nod in approval. The last part of the queue was already inside the complex, which contains the mausoleum, Ba Dinh square, the One-pillar pagoda, Ho Chi Minh’s house, a museum and the Presidential Palace. Finally, and right on time as they were about to close for lunch, it was our turn to enter the granite cube. We walked in in a tight line, climbed the stairs, and entered the room that contained the embalmed body of Vietnam’s most revered president. It was really cold and quiet, and the corpse looked a bit like a doll. Soldiers made sure we moved at a steady pace and didn’t allow pictures. The visit lasted about one minute, but somehow I still thought it was worth it, it was a unique experience.

Before leaving, we wandered around the square, caught the change of guard and checked out the tiny pagoda. Then we walked to the citadel, and because it was lunch time, we were able to visit it without paying. The site is not particularly impressive, definitely can’t compare with the one in Hue, but at least it felt more real than the touristy Old Quarter. My favorite part was the bonsais lined up between the gate and the flag tower. A bit further, there was a nice park with a Lenin statue, where local men congregated to play board games.

After a quick snack, we continued walking and dodging motorbikes, and got to the Temple of Literature. This was for sure the most beautiful visit in all of Hanoi. The 11th-century temple, dedicated to Confucius, is more than a “church”, it was Vietnam’s first university. Maybe for that reason, it was the only place where my old student ID got me a discount on the ticket price 😉

Apart from the main sanctuary, with its colorful altars full of offerings, the temple encompasses several courtyards with elaborate gates, ponds, and stone stelae. Make sure you check out the Stelae of Doctors on the left of the third courtyard, with its 82 plaques mounted on stone turtles, depicting the names of the graduates of royal exams. After a long day on foot, we decided to leave the war museums for our time in Saigon. Instead, we enjoyed a nice dinner and went to sleep early, getting ready for our Halong Bay cruise starting the next day. 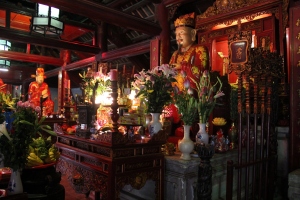 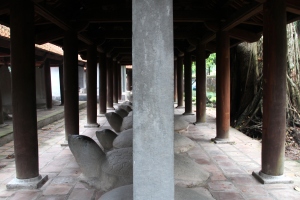 8 thoughts on “What to see in Hanoi, the hectic capital of Vietnam”