Yangon, until recently, the capital of Myanmar, can easily be visited in 1 day. Our itinerary started at the furthest north sites, the Chaukhtatgyi and Ngahtatgyyi pagodas, with their respective giant Bhuddas, one reclining and one seating. It was a great experience to observe local people, who are extremely devoted. Very early on in our time in Myanmar, we noticed that the country was for the most part, untouched by tourism. We barely saw a couple of foreigners each day, and locals were unspoiled, smiley and dressed in traditional style (e.g. longyi skirts for men), many with their faces painted with yellow dye (thanaka).

From there, we took a short taxi ride to Shwedagon Paya, the massive, golden pagoda, one of the most notorious religious building in Southeast Asia. It was very impressive due to the size and the amount of people praying or simply hanging out, eating lunch, in the numerous halls adjacent to the main zedi. After about an hour, we walked to the Kandawgyi Lake, a neat park nearby that offered a break from the brutal temperature (~40C, 100F) and humidity. There were lots of nice restaurants in the park and we took a much needed break. In all these pagodas, we had to take off our shoes and socks, and in Shwedagon even cover our legs and shoulders with some borrowed clothes. I would still recommend wearing very light clothes and flip flops to cope with the heat, and figure out what they want you to do in each temple. 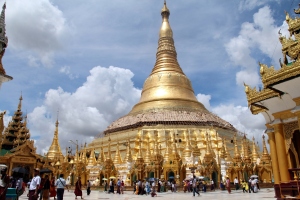 In the afternoon, we explored downtown, with its numerous colonial buildings, memories of better times. We walked around, from Sule Paya, through the book and jewelry streets, some parks, and to the nice Strand Hotel. One of our favorite things in the city was the street food around Mahabanddola Road: chicken skewers, fried quail egg bites, chickpea pancakes, noodles and bread puddings… yum! 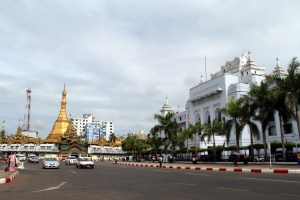 The anecdote of the day was getting arrested by the municipal police for jaywalking. We were crossing the roundabout in front of Sule, the same way we had done numerous times and the same way locals were doing it, when a bunch of cops started yelling at us and pointing at the intersection. We stopped and they grabbed us, as they were doing with a several locals. They were putting them in a bus and taking them god knows where. Elena kept saying “embassy” and released herself, while I kept saying that no, we were not getting in the bus, but was stuck with a female officer holding my backpack. Eventually they seemed to be giving up and we got out of there as fast as possible. Who would have thought that in this country you could get in trouble for such a simple thing!

5 thoughts on “What to see in Yangon, the gate to Myanmar”