It has been a bit over 24 hours since Kathmandu suffered the brutal earthquake, and you can still feel a tense calm in the air.

Our arrival in Kathmandu yesterday morning was surreal. 2 weeks ago I had decided to take a leave of absence and hike to the Everest Base Camp, an adventure that had been in my bucket list for years. As we boarded the plane that would take us from LAX to Guangzhou for a layover, we couldn’t imagine how much of an adventure we were getting ourselves into. The moment we landed, my phone started buzzing with messages, missed calls and emails… “Are you ok?” “Please call us” and similar. It took me a couple of minutes to realize what was going on.

The following 2 hours at the airport were filled with frenzy activity, as we and a bunch of other travelers tried to gather information and decide whether to continue to Kathmandu. Different embassies offered different advice (mostly discouraging, to be honest) while the airline, China Southern, was useless. Hotels and trekking agencies in Kathmandu weren’t picking up their phones, but it was unclear if it was because it was too early or because the lines were broken/saturated. At that point, we were absolutely confused, we didn’t know what to expect: some destruction but life getting back to normal over the next hours, or complete chaos and lack of shelter, food and water. About half of the travelers decided to stay…. We reflected for a couple more minutes, while the plane was boarding and people were pulling their bags out, and finally decided to go. 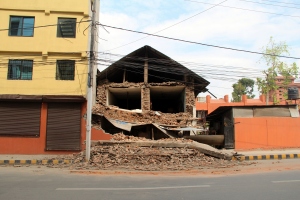 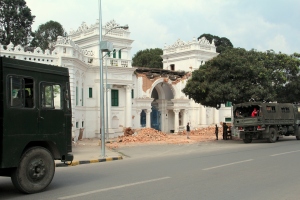 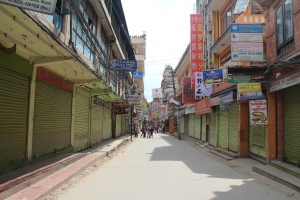 After asking the hotel concierge to keep our backpacks, we went on an exploratory walk of the city, trying always to stay on wide streets. What we saw, we will never forget. Hundreds of people had abandoned their homes and were “camping” on parks, palace gardens, roundabouts, and pretty much any open space of the city. People were clearly scared, many of them having lost friends or acquaintances the previous days, and just wanted to feel safe. Large amounts of debris and destroyed buildings were a macabre reminder of what had occurred, and could happen again. After a couple hours walking, we stopped at the only open restaurant we could find, and they served us the only dish that was available. 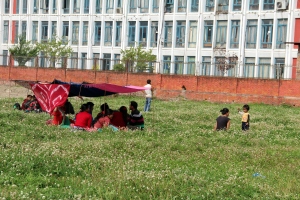 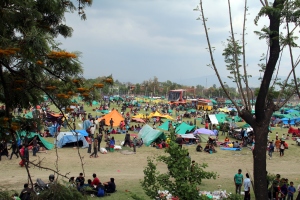 Our last stop was probably the most impressive locations: Durbar Square, the historic heart of Kathmandu, and one of the most beautiful architectural sites in the world. Its wonderful temples and shrines had suffered different levels of destruction, but were for the most part, still standing. Locals were also crammed in the open spaces in this plaza, and there was a post giving out relief packages. Most of the people taking pictures around me, were reporters. Sitting atop of one of the collapsed pyramids, observing the whole scene, it gave me chills. 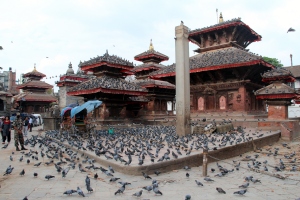 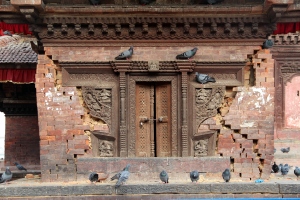 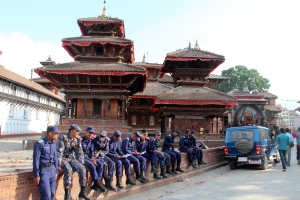 Back at the Yak & Yeti hotel, it was time to figure out how to spend the night. The hotel manager was recommending all the guests to get the blankets from their rooms and set up outside. Each family or group was organizing itself the best it could, using lawn chairs, umbrellas… We had two problems: we didn’t have a room (the hotel was fully booked) and grey clouds were coming in. We had to move quickly. First, we secured a garden table to sleep under, and a wooden board to lay on. Then, I went around the hotel rooms until I found one open and empty (I knew many tourists had fled without officially checking out), and grabbed blankets and pillows. Elena then found some bed covers that we used to cover the table, creating a sort of tent. The night was cold but we managed to stay warm, and slept almost uninterruptedly. It wasn’t the two tremors (apparently) that woke us up, but the strong rain making our feet wet. We compressed ourselves a bit more, and dozed until sunrise. I felt like I was in Hotel Rwanda. 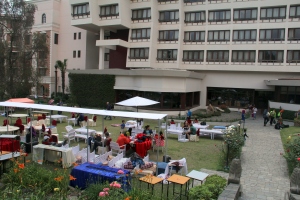 This morning we continued mastering our pirate skills and took over an empty room to clean ourselves, prepare some hot cocoa and recharge electronics. We felt proud of our resourcefulness! Right now our plan is to wait one more day (for a total of 72 hours that the authorities flagged as high risk), and then decided if we can go ahead with our original plan of hiking to EBC. Will continue informing live from Kathmandu, internet permitting.

4 thoughts on “Aftermath in Kathmandu”