We arrived in Banaue by Ohayami bus at 5am, when it was still dark and rather cold. A kid offered to take us to a guesthouse and we followed him… got a double room at the People’s Lodge, in the center of the town, for 800 PHP ($17), and quickly passed out.

At 7am we woke up and enjoyed the Banaue views for the first time: a mesmerizing green valley covered by rice terraces, carved by the Ifugao people 2,000 years ago. After a quick breakfast, we walked to the main square and hired a tricycle (which apparently works on coke ;P) to take us to the top of the mountain, the so-called Banaue viewpoint. Most people drive the tricycle up and down, but we wanted to be dropped off and hike down on our own. As we got higher, the fog wrapped us to the point that we weren’t able to see much of the rice terraces. But as we were trying to figure out the trailhead, the fog started to dissipate and we were able to see not only the paddies, but even a section of the ‘trail’ we intended to follow. 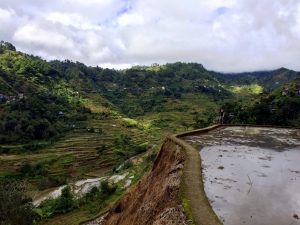 The plan was simple, or so we thought: hike down from the viewpoint to the village of Bocos, using a 4-5 km trail across the rice terraces. But the trail wasn’t such, rather a maze of stairs and irrigation channels, and soon we realized that it was hard to stay on track. Couple of times we ran into locals who insisted we hire them as guides… but we were stubborn and wanted to enjoy our adventure. It took us a bit over 3 hours to get to Bocos, though it felt much longer due to the strenuous topography, and even dangerous at times, as I’m sure we deviated from the main trail and hiked on narrow, slippery cliff-side paths. But the views were so worth it. And the peace of being up there alone even more so.

After eating ‘linner’ in our lodge and a bit of planning for the next day, we decided to take a nap… which turned into a very long night sleep. We really needed it!

The next morning we started very early, hiring a tricycle to take us to Batad saddle and back. The weather wasn’t much better than the day before, with thick fog and intermittent rain. We decided to hike anyway, rented sticks at a shack (probably the best spent 20 $ cents I’ve ever spent) and started the way down from the saddle to the village of Batad. It took us barely 45 min, but when we got there, the rice terraces were covered in fog. We waited for about an hour at a shack, playing with some super cute kids. The sky started to open and we hired the dad, Edi, to take us around the terraces; after the previous day we were sure we could do it alone, but felt like giving back to that nice family.

Edi guided us to the top of the mountain, where we enjoyed the most impressive view of the Batad amphitheater. Our legs were sore and the trail was again a mix of stairs and irrigation channels, so we appreciated having the sticks to help us balance and take some of the up and down pressure. In about two hours, we observed the rice terraces from all possible angles, as well as local farmers getting ready for planting.

We devoured our snacks and hiked back up to the saddle under heavy rain. Our tricycle was waiting and took us back to Banaue, where we warmed up and recovered, ate ‘linner’ again, before catching the overnight bus back to Manila.

9 thoughts on “Hiking through rice terraces in Banaue & Batad”

Chasing waterfalls... or why Hawaii is always a good idea :)
Happy anniversary, babe!
And that’s a wrap on our trip to Moorea and on 2020... what’s next?
Highlights from our road trip around Moorea, French Polynesia: Belvedere lookout, marae ruins, pineapple fields, cute churches and the coolest soccer field ever.
Enjoying the lagoon... perfect water, SUPs, kayaks, floaties, amazing snorkeling... and shark galore at night.
Day 2 in Moorea, French Polynesia: hiking up Mt. Rotui right by our hotel, to gorgeous views of the lagoon and the bays... and coming back to our plunge pool, much needed after multiple scrambles.