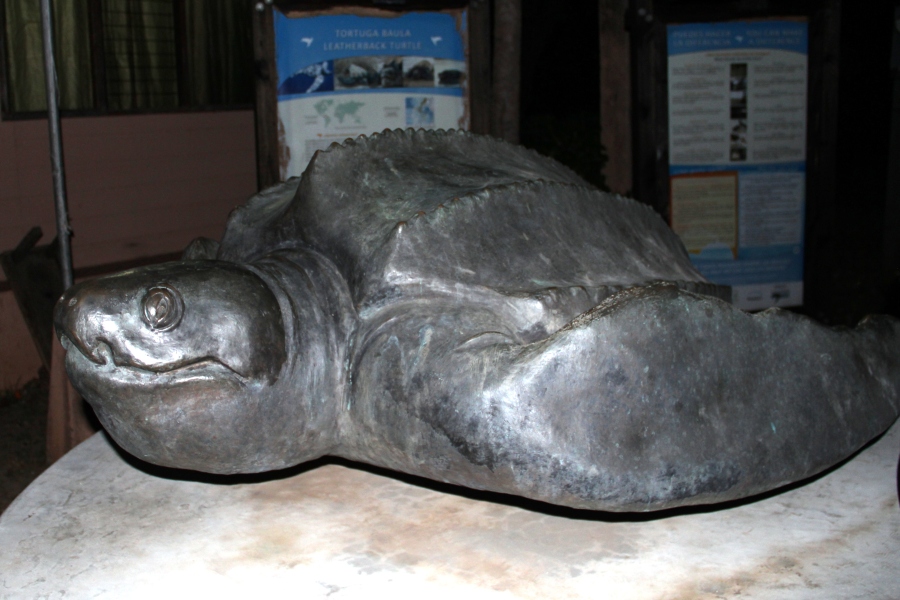 Costa Rica is a destination for observation of turtles, both laying eggs and hatching. Most people experience it in Tortuguero, but since we were outside of the season, we had given up on the idea. However, when we were in Corcovado, a Spanish couple told us that they had just seen a leatherback turtle laying eggs in Playa Grande. So we did some research and decided to take a detour on the way from Rio Celeste to Monteverde… a long detour on an already long day.

To observe the leatherback turtles you’re supposed to book in advance, as they only let 30 people into the beach per turtle. For those without a reservation, the Las Baulas National Marine Park gives out numbers starting at 6pm, starting after the last reserved numbers. We got there 5 min before 6pm, sneakily cut the line of people that were waiting and got numbers 48 and 49. That meant that we had the right to observe the second turtle got to the beach that night. The rangers are monitoring from 7pm to 2am, and most days they get 1 turtle, with few days with 0 and more than 1. The odds were not in our favor… but we noticed that there were a couple of families with small children that were already getting anxious, so time was in our favor.

We learned about the turtles, ate dinner and started watching a movie in our laptop inside the car… when a little after 11pm, they gave the turtle alarm. By then, there were less than 30 people left, so we were in! It is very hard to explain the experience that followed, there was something mystical about it. The turtle was ~1.5m long and ~0.7m wide. By the time we got to it, it had already dug a large hole in the sand, and started laying eggs. It laid over 60 eggs, slowly but surely. We took shifts to observe, in the dark, with dim red flashlights and always from behind, to not disturb it (no pics allowed). Then it used its back fins to cover the hole, and made its way to the water. Leatherback turtles are close to extinction, I can only hope the efforts to protect them succeed.

We were so excited when we got back to the car, that we couldn’t fall asleep, even after a very long day. So we decided to drive to Monteverde.

3 thoughts on “Private encounter with a leatherback turtle”