Travelling around Cuba wasn’t as easy as I expected. Most tourists are on some sort of organized tour, managed by a joint venture between the government and a foreign company, while local buses are all sold out (it’s Christmas holidays after all!). After a couple of days in Havana and a lot of asking around, I got a seat in a bus to Trinidad, ~4 hours west. On the road, we passed Bahia de Cochinos, infamous for the CIA-sponsored attempt to overthrow Fidel Castro in 1961. 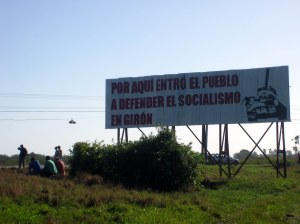 Trinidad is an absolute delight. True, it doesn’t have the street life of the capital, but its cobblestone streets, colorful colonial houses and horsemen give it a fairy tale feel. I walked around the bus stop and found a good homestay with vacancies fairly quickly, though negotiating the price took some time and a lot of jokes. Then slowly made my way to the Plaza Mayor, flanked by the main city buildings, and from there up the hill behind the town, through the most humble neighborhoods, for a nice sunset view. What a perfect town to spend time without thinking about time!

One thought on “Trinidad, the Cuban jewel”