Last night I flew from Rio de Janeiro to Salvador de Bahia, where I had responsively booked a hostel that I knew how to get to. But the flight got super delayed, so by the time we landed, buses weren’t running anymore. So I made friends with some yankies and suggested sharing a car – first tried to make friends with some Brazilians for a free ride, but no luck 😉 I walked up to the guy that was renting cars for Hertz, who wouldn’t have clients that late, and convinced him to take us for half the price of a taxi. We dropped off the yankies at their hotel by the beach; they were so lost and happy I had helped them that they gave me enough money for the full fare… woopy! But from there on, everything went wrong

The driver had no clue how to get to my hostel, he stopped and asked a junkie (really really junkie, nothing like the homeless in Santa Monica), who offered to guide us… the junkie was creeping by the car and every now and then would get tired and perch himself to the car windshield, like a bat. We drove like that through the creepiest neighborhoods I’ve seen in my life (the ones you envision when people talk about favelas, but without Ronaldo Nazario playing soccer), and I started thinking “that’s it, these two are accomplices… if I’m lucky, they’ll just rob me”. But no, they were really taking me to my hostel. The only problem was that after I paid the driver and they both left, I realized that all the doors and windows, including the ones of my hostel, were locked with bars (probably for a good reason). 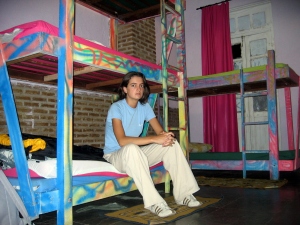 And there I was, alone, looking like a tourist, at 2am in Pelourinho, the historical district that locals had warned my was “muito perigoso”. I started walking to not look so clueless, and a black kid came over and offered to take me to his family’s pousada. I followed him because I really didn’t have any better options… and well, I ended up in a guesthouse that is really cool and cheap. Though when I got there I still looked as scared as you can see in the picture. 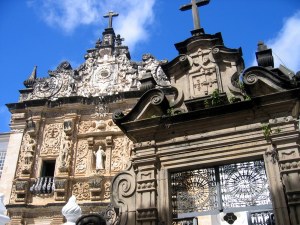 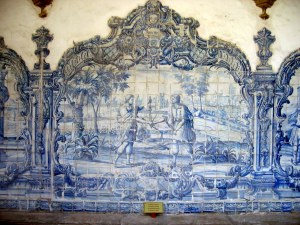 In daylight, Pelourinho looks much nicer 🙂 In fact, it might be one of my favorite downtowns in the world, with its charming colorful buildings, the colonial central square, and the friendly people. It doesn’t hurt that today was the kickoff to the Festa Junina, a celebration that drives hundreds of people to the streets, to dance to African rhythms all night long. The geography of this Salvador is as interesting as the one in Rio. Basically there is a huge cliff that dives the city into two parts, the upper and the lower city. Although the cidade alta contains most of the cultural sites, it’s worth making a trip to the cidade baixa, to see the other half, e.g. the financial district and the port. It’s an nice walk down, but I’d recommend taking the iconic elevator Lacerda on the way up. 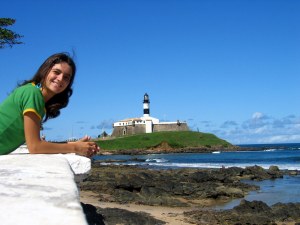 I spent my last day in Salvador chilling on the Port da Barra beach, which is quite picturesque with its lighthouse, but also quite crowded. I ran into the two yankies and they bought me some beers, because they felt so happy to see me alive… making friends!

4 thoughts on “Salvador de Bahia, where I got scared (mom don’t read this post)”