Right outside of the walled city, the neighborhood of Getsemani is more authentic and edgier than the old town. If inside the walls it’s all about colonial architecture and colorful flowers, here it’s about street art, street life and Afro-Caribbean heritage. There are still plenty of tourists and charming hotels and restaurants, but it does feel much more real.

We walked around Plaza de la Trinidad and marveled at the bird mural, then through to flag-covered Calle 29 (Calle de la Sierpe), and around through another flag-covered street, Carrera 10, past more art, down to umbrella-covered Callejon Angosto, and eventually reached Las Tres Guerreras mural on Avenida Pedregal. We sat down at a nice café to gulp some fruit juices before continuing our walk to the San Felipe Castle. 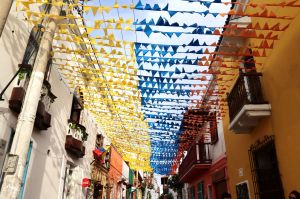 The castle is just ok, to be honest, the views are nothing spectacular, and the structure doesn’t retain much magic. Probably the most interesting thing about this site was the fact that it had to be built with limited sandstone, due to the lack of nearby quarries, so brick and coral fossils were used instead. We had observed these fossils on the walls of the old town the day before, and were wondering what the story was. A bit underwhelmed by this castle, we decided to skip the hike or taxi up to the Convento de La Popa, and took an evening stroll through Getsemani instead, which is worth enjoying both day and night.

The most typical day trip from Cartagena is to the idyllic beaches of Islas del Rosario or Isla Baru. But since we were going to spend a few days in Aruba on the way back home, we figured we would skip these and check out the more adventurous Tayrona National Park instead.

2 thoughts on “Getsemani and other sites in Cartagena”